Utah is one of the states of the United States. The standard abbreviation is UT, nicknamed Beehive State (Beehive State ). The beehive here does not refer to apiculture, but symbolizes the diligence and cooperation of the Utah people, the “Utahns”. The capital is Salt Lake City.

Utah’s history differs significantly from that of the other states. Before the arrival of the Europeans to the New World, the area was populated by Indian tribes. Originally these were the tribes of the Fremont and to the southeast the Pueblo. They disappeared in the 15th century and the Navajo came in the 18th century. Later the Goshute, the Paiute, the Shoshone and the Ute followed. The state would later be named after the Ute. These five tribes lived in the area when the Spanish explorers explored the area. around 1540 Francisco Vásquez de Coronado traveled through the region in search of the legendarySeven Cities of Cibola. The area, together with the entire southwest of the present United States, would form the Spanish and later Mexican province of Alta California. Despite being Mexican, the area was frequented by trappers and over time a few trading posts were established.

On July 24, 1847, the first Mormon settlers arrived in the area. The Mormons were treated with great distrust in the US at the time and were increasingly persecuted. The founder of this denomination, Joseph Smith, was lynched in 1844. The Mormons, led by Brigham Young, moved along the Mormon Trail to the Great Salt Lake in an inhospitable area that was then outside the United States but also hardly used by the Mexicans. These settlers founded hundreds of settlements (see Grafton) in an effort to secure land and resources for themselves. In doing so, they came into conflict with Indians who inhabited these areas. The first years were tough, but slowly it became more livable. In the years that followed, 70,000 Mormons would migrate to the area. Salt Lake City became the seat of the Church.

Soon, in 1848, after the Mexican-American War ended, Mexico ceded the area to the United States. Because the area was now American, it was decided that the Mormons should establish their own state. According to them, this was to become the State of Deseret that would encompass the Great Basin, the Colorado River basin, and southern present-day California. This area was considered too large, but Utah Territory was established in 1850. This happened on the same day that California became a state. Both decisions were part of the Compromise of 1850.Brigham Young became the first governor and soon Salt Lake City became the capital. Utah would become the only part of the western US where slavery was allowed. Tensions between the Mormons and the federal government led to the Utah War in 1857 – 1858 culminating in the Mountain Meadows Massacre in which 120 Americans traveling westward were killed by a Mormon militia.

In 1860, the Pony Express route passed through the north of the territory. The Transcontinental Railroad was completed on May 10, 1869 . In a ceremony, the tracks of the Central Pacific Railroad and the Union Pacific Railroad were connected with a gold nail to allow rail traffic between the eastern and western states. This ceremony took place at Promontory Point, northwest of Salt Lake City.

Utah Territory had to cede territories several times. The western portion became the state of Nevada and portions of the east were handed over to Wyoming and Colorado. It would take 46 years for the territory to accede as a state. Several applications for this were submitted, which were met with constant resistance in Washington. The main point was the polygamous marriage that was allowed or tolerated within the Mormon community. The Mormon Church outlawed polygamy in 1890 paved the way for entry. Utah formally became the 45th state of the United States on January 4, 1896.

Sunset as seen from Angels Landing in Zion National Park.

Utah is bordered to the north by Idaho and Wyoming, to the west by Nevada, to the east by Colorado and to the south by Arizona. Furthermore, in the southeast, it shares a vertex with New Mexico. This point, where Utah, Colorado, New Mexico and Arizona meet, is called Four Corners and is the only four-state point in the United States. Utah, Colorado and Wyoming are the only US states that have no natural borders but are bounded solely by meridians and parallels.

According to the constitution of the state, the state borders consist of 6 lines that follow the following parallels and meridians:

At the end of the 19th century, however, mistakes were made when setting out the boundaries in the terrain. As a result, the boundary markings (metal pins that were hammered into the ground at the time) are not exactly aligned with a fixed compass course everywhere. This makes the border with Colorado in particular more tortuous. The Four Corners monument was also not placed in exactly the right location at the time. The markings are nowadays seen as the legal boundary points. The boundary is formed by straight lines between these points.

Utah is an elevated state with the lowest point being 664 meters above sea level. It has areas with a desert climate, steppe climate and high mountain climate. Central and northeast Utah is dominated by the Rocky Mountains with mountain areas above the treeline and ski areas. The highest point is Kings Peak (4123 m). The west is occupied by the Great Basin with desert areas. This includes the Great Salt Lake(Great Salt Lake) and large salt flats. Many speed records have been broken during tests that could take place on the extremely flat and extinct surface (see: Bonneville Salt Flats). The east and south of the state lies on the Colorado Plateau, and this area is crossed by the Colorado River.

Much of the territory in the state is in the hands of the federal government and more than seventy percent is nature reserve. Utah is home to five National Parks, namely Bryce Canyon, Capitol Reef, Canyonlands, Arches, and Zion National Park. There is also the Dixie National Forest. Glen Canyon National Recreation Area is partially located in Utah. The state is known for its vast landscapes with special rock formations and gorges. To the southwest is Monument Valley.

According to TRACKAAH, the Salt Lake Temple, the main temple of the Church of Jesus Christ of Latter-day Saints, in Salt Lake City.

Utah’s gross product in 2001 was $70 billion. Large parts of the state are used by the United States armed forces.

Utah is the only US state with a majority of the population belonging to the same church, the Mormon Church.

According to COUNTRYAAH, Utah is divided into 29 counties.

The executive branch of the state is headed by a governor, who is directly elected by the voters in the state. The 2020 gubernatorial election was won by Republican Party Spencer Cox. He took office as governor of Utah in January 2021.

Utah is a conservative state, politically dominated by the Republican Party. The last time a Democratic presidential candidate won the state was in 1964. In the 2012 U.S. presidential election, Mormon Mitt Romney won the state with over 70% of Barack Obama ‘s vote. 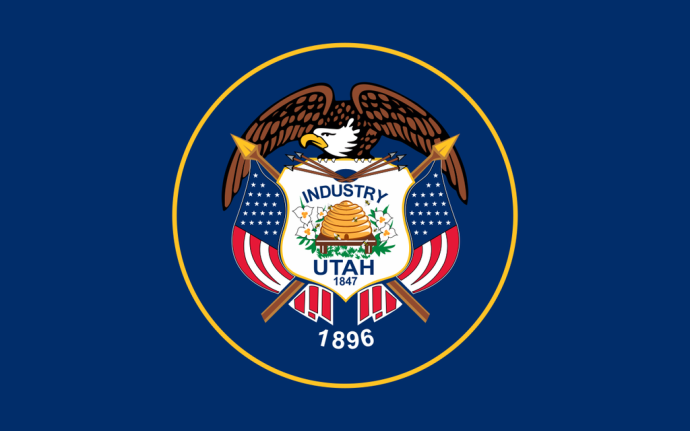