Rhode Island, officially the State of Rhode Island, is one of the states of the United States. Rhode Island is the smallest of the 50 US states in area and has the seventh smallest population. Its nickname is “The Ocean State”. The capital is Providence. Rhode Island is also referred to as “The Biggest Little State” by locals.

There are several theories about the origin of the name Rhode Island, but the consensus seems to be that the Dutch explorer Adriaen Block named the largest island Roodt Eilandt because of the red-colored clay. Another theory is that Rhode Island was named after the Greek island of Rhodes. Around 1524 the Italian explorer Giovanni da Verrazzano would have said of the island now called Block Island (see below) that it was about the same size as Rhodes. Later there would have been confusion about which island he meant, and so the largest island in the bay was given the name Rhode Island.

From 1644, the island was officially called Rhode Island and Isle of Rodes. Because there were two settlements on the mainland (Providence and Warwick), these were called the plantations. The term plantation was used at the time to refer to a small, young colony.

In 2010, a referendum was held on whether the official name of the state should be shortened to simply Rhode Island. This was rejected by a majority of 78%. Another referendum on the name was held during the 2020 US presidential election. With 53%, citizens voted for the new name The State of Rhode Island.

The area that now forms the state of Rhode Island was originally settled by Native American tribes. Roger Williams founded a colony there in 1636. Williams had left England for the Massachusetts Bay Colony because of his Puritan convictions, but he did not find the religious freedom he sought here either. In his new colony, he promised every resident absolute religious freedom and named it Providence Plantations. In the years that followed, Portsmouth and Newport were also founded. When one of the settlers, Samuel Gortonbought land from the Native Americans, a border dispute arose with the Massachusetts Bay Colony. They jointly established the Colony of Rhode Island and Providence Plantations.

Rhode Island was one of the thirteen colonies that fought together against English rule (see: American Revolution). On May 29, 1790, it became the thirteenth and final United States Constitution, after threats that it would otherwise be considered foreign and face export taxes.

In 1790, in the town of Pawtucket, Samuel Slater built the United States’ first water-powered textile factory, starting America’s industrial revolution. After this, numerous factories would be built along the Blackstone River.

In 1842 a revolt took place in Rhode Island under Thomas Dorr. The liberal constitution he designed was passed by referendum, but rejected by Governor Samuel Ward King.

On May 18, 1852, Rhode Island became the first state to outlaw slavery. Rhode Island sided with the Union during the American Civil War, which was triggered by slavery.

After the civil war, the industry in the state really took off and the population increased rapidly. In 1880, businessman John Jacob Astor IV bought a mansion in the state and had it extensively converted into a summer residence. Many New York businessmen followed suit making the state a destination for the wealthy.

The state of Rhode Island occupies 4005 km², of which 2709 km² is land. It is the smallest of the fifty states in terms of area, slightly larger than North Holland and belongs to the Eastern time zone.

Most of the state of Rhode Island is on the mainland; furthermore, there are the islands of Rhode Island, Prudence Island, and Conanicut Island, all of which are located in Narrangansett Bay, a bay on the Atlantic Ocean. About 20 km off the coast is Block Island, named after Adriaen Block, a Dutch explorer, who visited the island in 1614 .

Rhode Island is bordered to the north and east by Massachusetts and to the west by Connecticut.

The largest lake is the Scituate Reservoir. The highest point of the fairly flat state is only 247 m.

According to TRACKAAH, Rhode Island had 1,048,319 inhabitants (262 per km²). The largest cities are Providence and Middletown.

The capital, Providence, is located on Amtrak’s Northeast Corridor, which provides the city with high-speed rail connections to Boston, New York and Washington DC.

Interstate 95, a highway that is part of the Interstate Highway System, connects Rhode Island north to Boston and on to the Canadian border. West to New York and on to Philadelphia, Washington and on to Miami.

Rhode Island English is a typical accent with some of its own words that may have originated in early colonial times.

Coffee milk originated in the 19th century in the Italian community in the state and consists of milk mixed with coffee syrup. It has since been declared one of the official symbols of the state.

Clams casino is a conch dish that originated in the state in the early 20th century, probably in a casino, and has since spread across New England. The quahoq is the nickname for the large shells that are found off the coast and that are also used in dishes.

The comedy cartoon series Family Guy is set in the fictional Rhode Island town of Quahog. The series has many references to the state.

According to COUNTRYAAH, Rhode Island is divided into five counties.

The executive branch of the state is headed by a governor, who is directly elected by the voters in the state. The current governor has been Democratic Party Daniel McKee since March 2021. McKee, previously active as a lieutenant governor, succeeded his party colleague Gina Raimondo, who resigned early to become minister of economy in the federal government. 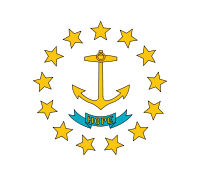