The sociology is an intellectual project tense and contradictory. For some it represents a powerful weapon in the service of dominant interests, for others it is the theoretical expression of revolutionary movements

Science that studies the behavior of society in general and seeks a perfect organization in social life. In these articles we list what it represents, what it seeks to understand and the basis for its emergence; as well as the list of some sociologists and some of their respective theories, and how sociology influences other sciences by explaining procedures observed in society, being part of science studies such as: philosophy, anthropology, economics and psychology.

In the current context of important and accelerated transformations that are going through societies, sociology, as a scientific discipline, systematically studies the social relations that develop between individuals, groups and social institutions. Modes of knowledge about contemporary societies are elaborated, analyzing, in particular, the multiple processes of human relationship, the forms of social organization and the dynamics of social change.

The emergence of Sociology as a science, with methods and objects of study, dates from the 19th century.

At that time, the Industrial Revolution brought about profound changes in the world of European labor; the French Revolution , in the political world. Illuminist ideals influenced thinkers to use reason to explain nature and society. In this context , Sociology arises , with the objective of understanding the transformations of societies.

Thinkers like Saint-Simon , Comte , Marx , Weber and Durkheim played a fundamental role in the formation of Sociology, structuring sociological thinking and elaborating concepts and methods.

These thinkers reflected on topics such as the influence of social laws on life in society; the ways in which companies operate; the way in which each society organizes its world of work; the class struggle; social class interests; individual perspectives; social actions, among other studies that shed light on how society can determine individuals.

Saint-Simon: the use of reason to achieve the good life in society

In this context of expanding the rationalist worldview and replacing absolutist monarchies with parliamentary monarchies and liberal republics (19th century), Saint-Simon (1760-1825) emerged, born Claude Henri de Rouvroy, who, at the age of 40, detached from material goods, he became one of the main defenders of the Enlightenment ideals and the application of reason to understand human issues, especially social ones.

Saint-Simon identified the use of rational thinking as a means to understand the mechanisms that governed nature and the creation of techniques for better use of natural resources, guaranteeing a better life for society.

One of his main ideas defended that the harmonious and peaceful coexistence of societies depended on the increase of the productive capacity , for the sustenance of the community. For him, then, leading humanity to a situation of peace and prosperity consisted of developing and applying rational thinking to understand and organize society.

The scientism has become the heart of the thought of Comte . Sociology should understand and control societies, finding social laws of their functioning, in the same way that the exact and biological sciences operated in the understanding and control of nature in search of progress.

In his Law of Three States , Comte argues that societies evolve from the theological stage to the metaphysical and, finally, scientific stage.

Here is Comte’s great challenge: to design a social science that would have the same efficiency as the natural sciences.

Durkheim starts from the Comtian premise: there are social laws, analogous to the laws of nature, that determine life in society. However, Durkheim focuses on the study of social facts and asks: what is the way in which societies work? Are social phenomena capable of determining how individuals act, think and feel? And how can individuals determine social phenomena?

Durkheim said that all science must constitute its own area of ​​investigation. Thus, sociology should also be independent, as it analyzed specific phenomena, differentiating itself from other areas. It should be concerned with social facts that presented themselves as coercive and external to individuals.

Karl Marx, Friedrich Engels and the Sociology of historical-dialectical materialism

Like Durkheim, Karl Marx and Friedrich Engels studied how society determines individuals. However, they attribute the determining factor of each society to the socio-historical context of the social relations of production , dividing societies into two antagonistic classes – the dominant and the dominated.

The dominant occupy the elite, which is sustained in the exploitation of the dominated. These, in turn, are fighting for the end of exploitation and the privileges of the elite. This social theory, original to Marx and Engels, is called historical-dialectical materialism.

For Weber, society was not constituted of a conscious collective body that delimited and determined the steps of individuals, whose individual wishes and determinations lead to their own directions, making it impossible to have a broad and complete panorama of society, the whole would only make sense upon understanding the totality from individual perspectives, which is impossible.

For Weber, it is necessary to explore individual perspectives in order to perceive nuances in society, its values ​​and behaviors. This is possible by developing the concept of social action: the act of an individual addressing another, establishing contact and having an objective, but without knowing how the other will react. 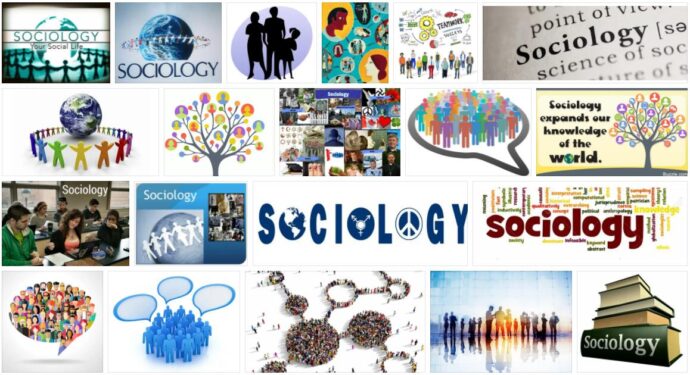