It is prohibited by law for children under the age of fourteen to carry out any child labor. Up to this age the child may even be apprentice in some work, but under no circumstances can he do it.

Despite all these legal conditions, the social reality of some countries, such as Brazil, generates the need for an increase in income for the poorest families, who often have their children as a source of income. In this case, the more children in the family, the more beggars or street vendors to increase family income.

Child labor, both in large centers and in rural areas, is a major concern for NGOs and people involved in this issue. It is common for children to be exploited with wages that may be nothing more than a plate of food and with activities that cause serious physical and psychological damage in each of them, removing them from school and subjecting them to slave labor.

Talking about child labor is delicate and difficult, because, in a situation of absolute misery, it is very difficult to convince parents that children should not work, and employers are violently against complaints and measures.

Today, child labor is characteristic mainly of emerging countries, although it also exists in the First World. More than half (61%) of the children between the ages of 5 and 14 who work – many full-time – are on the Asian continent: a contingent of approximately 152,500,000 children. In proportionate numbers, Africa uses child labor more than any other region – 2 out of 5 African children work.

In general, the incidence of child labor is higher in rural areas (70%), mainly in agricultural activities – in Brazil, many children are found working in charcoal, mining, sugar cane fields and small family farms.

With the intense urbanization process, the number of children employed in cities has also grown, especially in the sectors of service, commerce, civil construction, industry and domestic work.

Since its founding, one of the main objectives of the ILO – International Labor Organization – has been to abolish the work of children, or at least ensure that they carry out activities compatible with their physical capacity and have time to study.

The greatest concern, however, is still the fight against unpaid and unhealthy work, which would also be characterized as slave labor , in addition to causing diseases and increasing the risk of accidents.

There are also several programs to combat child labor in Brazil, for example:

Child labor is associated with poverty, which forces children to contribute to the family’s livelihood. For this reason, many of these projects, in addition to valuing children by defending and motivating them to learn, provide financial support to their families, so that they can release their children from work.

These initiatives have served children employed in:

The work of the smallest apprentice

This apprenticeship is considered as a technical-professional training, which has to guarantee children’s time in regular education, with mandatory attendance; it cannot be an activity that impairs the adolescent’s development and must be carried out at special times in order not to be characterized as child labor.

Since the time of Getúlio Vargas, adolescents over the age of fourteen have a guaranteed percentage in the labor market, but nighttime, unhealthy or dangerous functions are absolutely prohibited, making it difficult for employers to be interested in this type of labor. -constructions.

When children under the age of fourteen are apprentices, the law guarantees them the right to an apprenticeship scholarship, which is not always enforced in practice, and when over fourteen, labor and social security rights have to be respected. 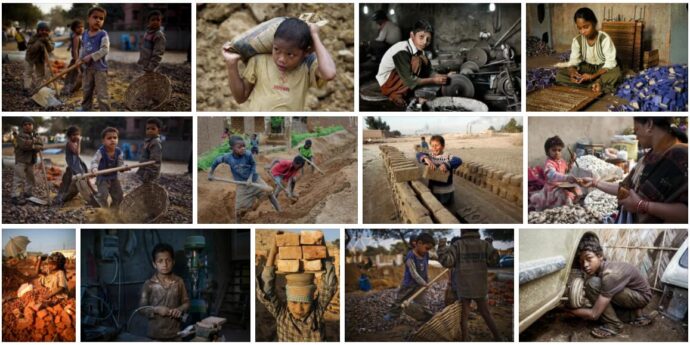