Maryland is one of the states of the United States. The standard abbreviation for the “Old Line State” , as it is nicknamed, is MD. The capital is Annapolis.

Maryland was originally an English colony, founded by George Calvert (Lord Baltimore), who led the first settlers to the area on March 25, 1634. The majority of the inhabitants were Catholic, unlike in most other colonies at the time. The Maryland Toleration Act of 1649 was one of the first laws that explicitly allowed multiple (Christian) faiths. The state, contrary to popular belief, is not named after the Blessed Virgin Mary, but after the French wife of King Charles I of England, Queen Henrietta Maria.

The area that the colony was allowed to encompass was initially that between the 40th parallel and the Potomac River south of it, but this was based on an erroneous map. Because this would make Philadelphia, the principal city in Pennsylvania, part of Maryland, the Calverts and the Penn family, who controlled Pennsylvania, appointed astronomer Charles Mason and surveyor Jeremiah Dixon in the 18th century . The boundary between the two colonies at latitude 39°43’20” north is part of what was later called the Mason-Dixon line.

Baltimore was founded in 1729, named after Lord Baltimore. The city became an important Catholic center and archdiocese.

Maryland was one of thirteen colonies that rebelled against the British crown (see American Revolution). On March 1, 1781, it was the last of the thirteen colonies to approve the Articles of Confederation . With that, they came into effect.

In 1790, Maryland, like Virginia, ceded land for the creation of a federal district: Washington DC.

During the American Civil War, Maryland, which lay between the Union and Confederate states, remained largely neutral. The bloody Battle of Antietam took place on September 17, 1862.

Maryland was the first state in the world to have a mobile library in 1905. The books were carried around in Washington County by horse and cart. This phenomenon spread further throughout the United States and also in Europe.

Maryland was one of the first American states to introduce same-sex marriage. It became the 18th state in the United States to abolish the death penalty in 2013. On May 2, 2013, Governor Martin O’Malley signed the bill in question.

Maryland had the highest median household income of any state in 2014.

The west of the state is hillier than the east. The highest point is 1024 m above sea level.

As indicated above, the southern boundary is formed by the Potomac River, which like the Susquehanna flows into Chesapeake Bay. There are many swamps along this bay.

The largest city is Baltimore. Furthermore, many of Washington DC ‘s suburbs lie within Maryland territory.

According to COUNTRYAAH, Maryland is divided into 23 counties and one independent city, Baltimore.

The executive branch of the state is headed by a governor, who is directly elected by the voters in the state. In 2014, Larry Hogan of the Republican Party was elected governor of the state of Maryland. He succeeded Democrat Martin O’Malley, who served as governor of Maryland for eight years, on January 20, 2015. 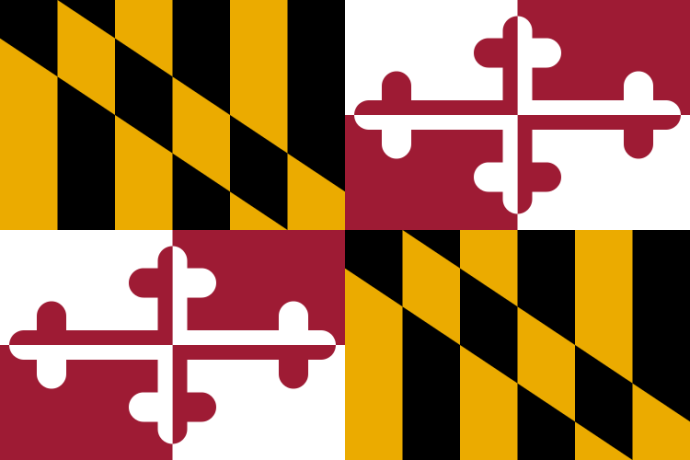